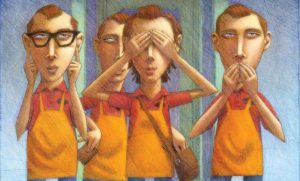 Small businesses have it rough. They’re particularly vulnerable to fraud because they lack the resources to implement complete systems of internal controls and properly segregate accounting duties among their limited staffs. The following is a scenario seen all too often…

Bob and his brother, Bill, owners and operators of Acme Tractor for 30 years, were close to retirement. A local bank had continually financed Acme, which had an inventory of farm tractors worth millions of dollars. The owner’s wives, Jane and Julie, shared accounting duties in the company. Jane would approve invoices. Julie would prepare the checks and either Bill or Bob would sign them. The receipt and payment cycle included a series of checks and balances with no one employee responsible for the entire cycle.

Jane and Julie retired from the business, and James, Bob’s son, assumed the bookkeeping responsibilities. James, 30, had been working in various jobs at the business since high school. Now the brothers entrusted him with all aspects of bookkeeping for the business: accounts payable, accounts receivable, payroll, and all account and bank reconciliations. They gave him check-signing ability and a business credit card.

Soon after becoming the bookkeeper, James married and began a family. As his personal monthly bills increased, he found it difficult to maintain the lifestyle he had known when he was single and living with his parents.

The fraud scheme began simply. At first, James began illegally using his business p-card (or purchasing card) for small personal expenses, such as gas for his personal vehicle and fast food meals. After several months, his charges for personal expenses increased in number and dollar amount, including charges for taking out his wife and children to fine restaurants, clothing for himself and his family, and even high-end electronic products. No one at Acme noticed the continual increase in charges for personal items because James controlled all payment checks to the credit card company.

James’ fraudulent activities expanded. He began embezzling from the payroll system. Because he was a manager, he didn’t have to use the time clock and began to pay himself for excessive overtime pay. He would give himself paychecks in lieu of not taking vacation time, even though he took all his vacation days. Acme management was still oblivious.

He then began writing checks payable to himself, but he would write a regular recurring vendor’s name on each check stub and hand-key it into the computer system. When the bank statements came each month, James would alter the images of the checks on the statements to match the vendors on the check stubs and in the system. Then he would hide evidence of the fraudulent checks he had cashed by photocopying the altered pages of the bank statements and shredding the original statements.

Crafty James wasn’t done yet. He opened a new personal credit card at the business’ bank. Now it was easy for him to electronically make bank drafts for paying the business’ monthly credit card statements and then write company checks to pay his personal card. If anyone reviewed the check stubs, it would only appear that one credit card invoice had been paid each month. James could charge the company’s credit card for his personal expenses and charge additional purchases to this new credit card. He used company funds to pay off both cards. Sweet deal.

Some fraudsters rationalize their thefts as “temporary” loans they will repay later. James executed his frauds without any intention of returning the money. His thefts from the company for 2½ years were large enough to create company cash flow problems.

One of James’ cousins accidentally discovered the crimes in December 2010 when he was searching the business’ online banking system for a canceled check and discovered that several checks in one month had been payable to and signed by James.

Management didn’t contact law enforcement nor engage an outside accountant. During its internal investigation, the family determined that it had lost at least $60,000 (though it was probably quite a bit more than that). Family members confronted James. He confessed and explained how he had stolen the money. The business fired him after he signed an agreement for restitution, which stipulated that the family wouldn’t prosecute.

This story is MUCH more common than you may think and can certainly happen to your business. We have developed a cost-effective solution to review your procedures and help PREVENT fraud like this from happening to you. Call us today or